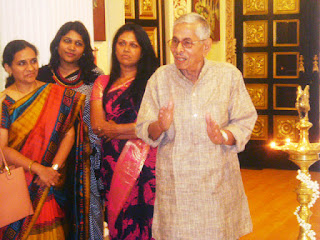 In view of International Women’s Day, a group painting exhibition by three talented women artists namely D.Shrinithi, M.Anuradha and Vivia Valentina is on at gallery “La Galerie D’Expression,” in Hotel Ambassador Pallava, from 16th to 31st March 2016. The painting exhibition was inaugurated by Dr.B.R.Annapillai, Founder-President of Tamil Nadu Arts and Crafts Improvement Association and Ex.Gc.Member of Lalit Kala Akademy, New Delhi on 16th March 2016 in a grand and colourful manner. Mrs.Shrinithi has won the Kumaran Silk Award held by TACIA in 2012, 13, 14 and 15. She also won the Jury Award in the year 2013 for the Sri Ajanta Kalaramam, Tennalii and won the special award in the year 2013 for AMMA ART ACADEMY at Sullurpet. Mrs.Anuradha has won the 2nd place award for International women’s day event conducted by ‘DURGA,” an NGO in Bangalore. She also won the Rajaji Award for All India Art competition in 2014 conducted by AAA Academy at Nellore. Mrs.Vivia has won the first prize award at a corporate level competition held at Ascendas IT Park in 2011.Her paintings are currently displayed at Naturals saloon, St.Thomas Mount, Chennai and at the restaurant “The Shaack,” Anna Nagar, Chennai.