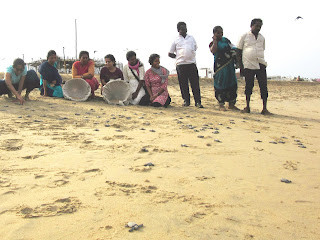 Working jointly with the Wildlife Wing of the Forest Department of Tamil Nadu, TREE Foundation’s Sea Turtle Protection Force Members (STPF’s) have gathered nearly 424 nests along the Kanchipuram coast, Tamil Nadu till date. Each nest contains nearly 80 to 120 eggs. After 48 to 52 days, the baby hatchlings emerge from these nests and set out on their journey into the expansive ocean. Watching these baby turtles (known as a "hatchlings") struggle out of the nest and make their way to the water is an emotional experience.

TREE Foundation is an NGO, founded by Dr. Supraja Dharini in 2002, inspired and guided by Dr. Jane Goodall DBE, and driven by compassion and care for the welfare of all animals, environment and communities. TREE Foundation pioneered a successful community- based conservation program for the endangered Olive Ridley turtles that nest along the South- eastern coast of India. The foundation focuses on the conservation of sea turtles through community education and training. Local young fishermen, who previously were turtle egg poachers, are now engaged as Sea Turtle Protection Force (STPF) members. This provides them with an alternative means of livelihood. TREE Foundation works jointly with the Wildlife Wing of the Forest Department, the Department of Fisheries of Tamil Nadu, Andhra Pradesh and Odisha, the Indian Coast Guard and the Marine Police.TREE Foundation is expanding its current program to protect turtles at sea and minimize accidental catch of sea turtles during fishing activities, in order to reduce mortality of turtles coming in to nest, in addition to protecting turtle nesting sites and turtle eggs.