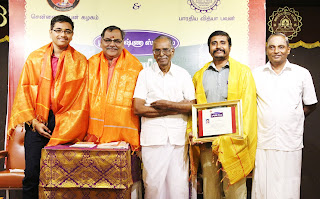 Sri Krishna Sweets jointly with Chennai Kamban Kazhagam and Bharatiya Vidya Bhavan organized under the banner ‘Kambanil Azham Kanda Vezhum’ as part of Naal Thorum Nalathu Seivom programmes round the year. Sri. Arunan was felicitated with Tamil Nidhi Award. Illakkiyaveethi Iniyavan presided over the function and felicitated the speakers Sri. Aranga Ramalingam and Sri. Nigamanandha Sarma. Sri Bala Srinivasan in his welcome speech appreciated Sri Krishna Sweets for doing yeomen service to Tamil literary works. In Arignar Arangam Sri. Aranga Ramalingam spoke on ‘Sri. A. S. Ganasambandam’ a Tamil writer, scholar and literary critic and in Ilaignar Arangam Sri. Nigamanandha Sarma spoke on ‘Valli’. Sri. Nigamanandha Sarma on ‘Valli’ praised how Kambar has praised his talents as king of Kishkindha. Valli was portrayed as a very courageous person. He spoke on how ability determines the capability of a person while motivation determines what you do and attitude determines how you do it. Sri. Aranga Ramalingam on the other hand chooses to pick the character of Sri Hanuman in Kambaramayanam and effectively communicate three important principles be followed. He spoke on how to decide on your mentor later he explained the importance of the power of vision and finally he spoke about the power of Soodamani and how Sri Hanuman got an initiation (Deeksha) from Mother Sita.
at Saturday, July 14, 2018