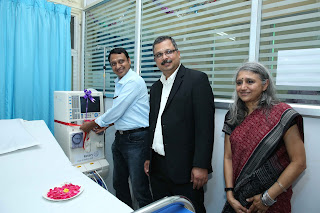 TANKER (Tamilnad Kidney Research) Foundation is a registered non-profit charitable organisation started in June 1993 with the aim of helping under-privileged patients with kidney disease by giving subsidised dialysis and one time financial help for medication, investigation and transplantation and spread awareness about kidney disease. TANKER cares for those, the underprivileged, who suffer kidney problems of any kind, reversible or terminal, regardless of caste, creed, sex or religion.The Machines were donated and inaugurated by Mr. Sundaresan –Family & Friends and Mr. Ashwin Kumar of Dr. T.N Krishnaswamy & Smt. Janaki Ammal Charitable Trust, Rotary Club of Madras East (RCME) in expanded space given by Greater Chennai Corporation at the Greater Chennai Corporation Diagnostic Center, Kodambakkam High Road,Valluvarkottam, Nungambakkam, Chennai – 600034 on Saturday 05th October 2019.Mrs. Latha Kumaraswami , Managing Trustee of TANKER Foundation gave an update of TANKER and said that so far TANKER has done almost 3 lakh free and subsidized dialysis through their 8 dialysis centres thanks to valuable support from the CMCHIS,Greater Chennai Corporation and various Rotary Clubs and other valuable donors. TANKER has given donations of Rs.2.75 crores for medications and investigation costs. TANKER has conducted 1205 Awareness programmes reaching out to 1.8 lakh people and over 34000 people have been screened for kidney disease. The Corporation TANKER RCME dialysis unit started with 4 machines and expanded to 10 and now has 17 machines. Rtn Gopal,President of Rotary Club of Madras East said that the RCME was happy to associate with TANKER and the Greater Chennai Corporation. RCME had made all efforts to make this a premium dialysis unit.Mr. Sundaresan spoke of his chance meeting with the staff of TANKER and that their dedication inspired him to raise 18 Lakhs through family and friends for 3 dialysis machines. He was raising funds for 1 more machine. The machines were inaugurated by Mr.Sundaresan, Mr.Ashwin Kumar,Rtn Gopal and other RCME members.