World Day Against Trafficking in Persons

World Day Against Trafficking in Persons is observed on 30th July 2020. ICWO Indian Community Welfare Organisation working on the front line to end human trafficking through establishing AHTC’s (Anti Human Trafficking Clubs in Tamil Nadu). As part of the awareness to the public Dr.P.M.Nair, IPS (Retd), International Expert, Human Trafficking Matters released E -Poster title "Our Children  are NOT for sale" Audio songs in Tami and English at ICWO Head office in Anna Nagar. Trafficking in persons is a serious crime affecting a large number of people across the globe 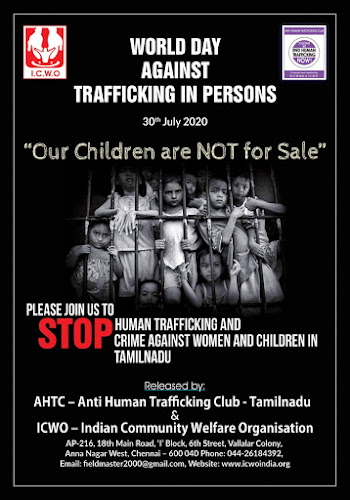 The most current available data from the National Crime Records Bureau (NCRB) indicate that there were 8,132 reported cases of human trafficking across India in 2016. In the same year, 15,379 people were trafficked of whom 9,034 victims were below the age of 18. In addition, 23,117 people were rescued from trafficking situations of which 14,183 people were below the age of 18. Most of the rescued victims reported being trafficked for the purpose of forced labour (10,509 victims), followed by sexual exploitation for prostitution (4,980 victims), and other forms of sexual exploitation (2,590 cases). . ICWO aim to establish 100 AHTC's in Colleges and /Institutions across Tamil Nadu. About 54 AHTC's are established in 19 Districts with the support District Co-ordinating NGOs in Tamil Nadu.