Mayavaram Krishnasamy Thiyagaraja Bhagavathar, also known by his initials as M.K.T., was an Indian actor, producer and Carnatic singer. He is considered to be one of the most successful actors in Tamil Cinema ever and the First Super Star of Tamil Cinema. 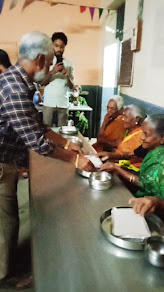 On Occasion of his 112th Birthday on 1st March 2011, his nephew Mr.M.Thyagarajan, Mrs.T.Radha and his grandson Mr.B.Sairam served special meals for 55 residents in Shelter for Homeless People in Chennai. The shelter is administrated by Indian Community Welfare Organisation (ICWO).

According to official sources it is stated that Bhagavathar acted in 14 films of which 10 were box-office hits. Bhagavathar's 1944 film Haridas ran for three consecutive years at Broadway Theater, Madras and created the record for the longest continuous run at a single theater.