Her contribution towards education has made an impact in the society 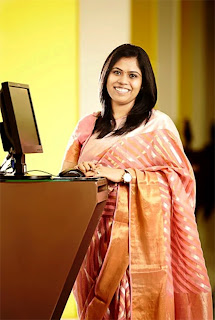 For the first time in the country, The Union Ministry of Women and Child Development (MWCD) in collaboration with Facebook launched the  '#100 Women Initiative', that aims to recognize and acknowledge women who are making a difference in their communities across the country.  The '#100 Women Initiative' involves a contest to select 100 women achievers of India through public nominations via social media.The initiative was made available to public from 15th July, 2015 to 30th September, 2015, to receive nomination  by Smt. Maneka Sanjay Gandhi, Union Minister for Women and Child Development and Ms. Ankhi Das, Director of Public Policy in South and Central Asia at Face Book.Selection of 100 most Impactful Women has been done after three levels of screening. After the initial application, a Jury decides the top 200 women on the basis of their credentials.  All the selected 200 women were uploaded in the Ministry face book page (https://www.facebook.com/ministryWCD). This was followed by public voting for these 200 women on Facebook. Based on the votes received under each category, top 100 Impactful women was selected. The 100 Impactful women were selected under various categories, each category will have only one women was selected.Dr. Mariazeena Johnson, Director, Sathyabama University has been selected (as one of 100 achievers)  in the category of Education.  This award is in recognition of her contribution towards education which has made an impact in the society. Dr. Mariazeena Johnson has done her Ph.D. from University of Madras and has undertaken various projects for self employment of women,  Viz: Inclusive education (an exclusive program for the visually challenged and under privileged children in the society),  My Saturday University, University School Adoption Program (in which five schools have been adopted so far - Nalambakkam Village School, Hastinapuram Government Higher Secondary School, Karappakkam Primary School, Kannagi Nagar Government School, Ezhil Nagar Government School),  Village Adoption programme (Nalabakkam Village)  are the innovative ideas that were created and implemented by Dr. Mariazeena Johnson.The recipient award  Dr. Mariazeena Johnson feels that "Only a little has been done, a long way to go for the upliftment of women and under privileged in the society and this award is an honour for all the women fraternity".The awardees will be hosted by the Honoroble President of India Shri Pranab Mukherjee on 22nd January, 2016, at Rashtrapati Bhavan the day when Prime Minister had launched "Beti Bachao, Beti Padhao" Programme.
at Saturday, January 09, 2016