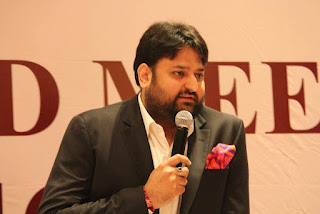 Mr.MohitKamboj has been re-elected unopposed as the National president of India Bullion and Jewellers Association (IBJA) in a meeting of Governing Board held in Mumbai for the five year term ending in 2021.India Bullion and jewelers association had dissolved its board in the last week of December . The fresh election were announced soon thereafter wherein 20 directors were elected from various categories i.e. Bullion merchant, diamond, logistic, NBFC, Retailers, manufacturers, Nominated agencies etc. In a closed door meeting held today in Mumbai all 20 directors have unanimously relectedMr.MohitKamboj as the national president of the association for the period of five year i.e. from 2016-2021.IBJA’s yearly event India International Bullion Summit (IIBS) is now the most watched for event in the industry. ShriNarendra Modiji and Shri Shaktikanta Das ji , Secretary economic affairs have been part of IIBS event of IBJA under the leadership of Mr.Mohit Kamboj.IBJA has been recently in the limelight due to formation of world Silver council to set the purity standard for the silver. IBJA has tied up with Bombay Stock exchange to start Bullion exchange in the country. The milestone achieved during the leadership of Mr.Mohit Kamboj is countless. IBJA has also started Skill Development initiative and various other CSR activities under Mr.Kamboj’s leadership.IBJA is all set to expand its members to one lac members and plans to start office in all the state of the country. Process has also started to set up IBJA offices in Middle east, UK and Africa.One of the Directors stated that “ Mr.Kamboj was only in the race and no other names were discussed to appoint National President of the association. The decision to elect Mr.Kamboj as National President was with 100% majority and there were no two thoughts about this. He also stated that “IBJA will scale to new heights under the leadership of 32 year old Mr.Kamboj”.
at Thursday, January 28, 2016