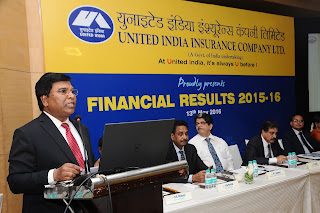 The Board of Directors of United India Insurance Company Limited has approved the Company’s accounts for the year 2015 - 16 on 13th May 2015. The Company completed a premium of ` 12250 Crores for the year growing at over 14.58%. The Company posted this creditable business growth despite acute competition in the market among the 29 players. The Company’s growth trajectory was fuelled by health insurance growing at 30%, motor at over 13.42% and fire insurance at over 5%. Personal Accident portfolio and Liability portfolio have posted growth of 10% and 17% respectively.Various Verticals of the Company have performed and shown high growth during the year. The LCB vertical, despite stiff competition grew by 16%. The SME vertical grew by 26% during the period to reach ` 473 Crores. The agency vertical grew by 14% in the year, with an accretion of ` 743 Crores The company has 54536 agents and plans to take the agency strength to 60000 in the current year.Under Pradhan Mantri Suraksha Bima Yojana, where Personal Accident cover of ` 2 lacs is available to bank account holders at ` 12/- per annum, the Company has already enrolled more than 2.28 crore customers, under the scheme. As on date 1425 claims have been reported, out of which 1180 claims have been settled. The Company has taken various initiatives to obtain renewals in respect of all the enrolments. We have carried out an advertisement campaign through ‘Radio City’ Channel in different languages in the month of April 2016, sent SMS alerts to the enrolled insureds and communicated to our Bancassurance partners. The advertisement campaign is going to be repeated during the month of May 2016 in order to ensure renewal of the policies.The net incurred claims were impacted due to the unprecedented catastrophic floods in Chennai, the like of which was not seen in the last hundred years. 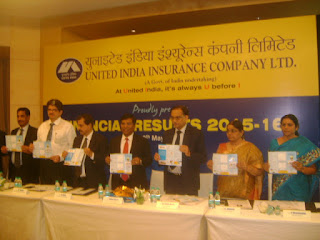 The Company received 7480 claims amounting to ` 1413 Crores More than 98% of these claims have been settled. The Chennai Regional Office of the Company had carried out a commendable job by carving out a separate cell to deal with the claims that were reported during the month of December 2016. The Company offered on-the spot compensation based on the make of the vehicles which was well received by the insured’s. Seven Camps were organized to receive claim intimations during the disaster period. Despite this, the Company, through efficient claims management, was able to post claims ratio of 87.81% which is a nominal increase of 3.39% compared to last year.
The Company has reported a Profit Before Tax of ` 256 Crores and Profit after Tax (PAT) of ` 221 Crores The Investment income of the Company for the year stood at `2472 Crores as against `2126 Crores in the previous year, an increase of over 16%. The Market value of the Company's total investment portfolio at the end of the year was `24021 Crores and the Networth of the Company stood at a robust `5731 Crores as against ` 5589 Crores at the end of the last year.The Company is efficiently managing the mammoth TN Chief Minister's Health Insurance Scheme for BPL families. The Company is also implementing the TN Government Pensioners Health Insurance Scheme covering more than 6 lakh pensioners.The Company has recruited 1050 employees last year to service the growing business and customer needs. The Company introduced two new products in the market last year UNI Product Liability, UNI Executive Protect Insurance and a revised ShopKeepers Insurance Product. The Company plans to launch initiatives to further the insurance inclusion in the country by opening more Micro Offices in tier 4 towns and below during the year. Last year 83 micro offices were opened taking the total of such offices to 967. The Company has also mapped around 8456 Rural Authorized Persons under the Common Service Centre Distribution Channel. The Company would tie up with more Insurance Marketing Firms and introduce products to be sold through the Points of Sales Persons, the new distribution channels approved by the Authority. The company adopted a Corporate Social Responsibility (CSR) programme in terms of adopting villages to improve their social and educational infrastructure and spreading insurance awareness amongst students in the identified schools. Last year the company adopted 10 villages and plans to adopt 25 villages under Rural Infrastructure Program. The Company has plans to adopt 6 villages during the current fiscal with a Comprehensive Village Adoption Scheme. Last year insurance awareness was spread in 53 identified schools and in current year the company plans to do the same in 50 schools. The company donated ` 2 Crores to TN Chief Minister’s Relief Fund last year apart from participating in the relief work by distributing water bottles, blankets etc.The Company has online customer portals in respect of 8 retail insurance products (Motor, Health, PA, OMP, House holders, Shopkeeper, Crop insurance and Marine Insurance Open cover) and extended online portal facilities to 2032 motor dealers and 11906 agents. More than 39 lakh policies were issued through the portals. The Company has a secure mobile insurance application to facilitate easy access anytime – anywhere for buying insurance by the customers. The Company proposes to build a 15 storey structure in the existing land which will become a landmark in the Chennai City. The foundation stone of the new building was laid on 12.05.2016 during a pompous ceremony organized in the premises.The Company continues to enjoy strong fundamentals with a Solvency Ratio of 1.91 as against the Regulatory requirement of 1.50. ICRA has accorded iAAA rating for the 13th successive year to the Company, indicating its highest claim paying credentials. The Company secured a financial strength rating of B++ (Positive), for the last four years from AM Best, an International Rating Agency. The year’s results show that the Company's strategies are yielding the desired results and the Company is optimistic to comfortably complete a premium of ` 14,444 Crores with over 17% growth rate in the current fiscal.The Company has 16366 experienced and talented human resources who are passionately working to take the Company to greater heights and also promote the cause of insurance inclusion of the vast uninsured population in the country..