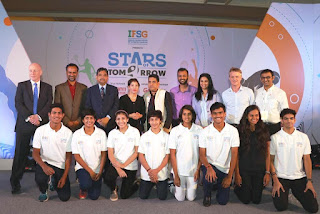 The Indian Federation of Sports Gaming (IFSG), India's first sports gaming industry body committed to protect consumer interests through self-regulation, launched its athlete support programme, 'Stars of Tomorrow' (SOT), with an aim to identify and support India’s future sporting talent in diverse set non-mainstream sports such as Sailing, Squash, Tennis, Swimming and Golf to name a few. Dream11 Foundation, the primary contributor to this programme, has pledged Rs.3 crores to support IFSG’s cause. Nethra Kumanan, 21-year-old Sailor from Chennai, was one of the 13 chosen athletes. Nethra started her sailing journey at a summer camp that was organized by Tamil Nadu Sailing Association. In 2013, she started training professionally and later qualified for 2014 and 2018 Asian Games. Nethra’s was felicitated and presented the certificate of ‘Stars of Tomorrow’ by Mary Kom, 6-time World Amateur Boxing Champion & Padma Bhushan Awardee, Prof. Ratnakar Shetty, ex-Chief Administration Officer - BCCI & Advisor – IFSG, and Harsh Jain, Director - Dream11 Foundation. Launching the Stars of Tomorrow programme, John Loffhagen, President, IFSG, said that IFSG was inspired by the Indian Sports Ministry’s efforts in building India as a great sporting nation and wanted to facilitate and contribute towards the cause. Talking about the association with the initiative, Harsh Jain, Director - Dream11 Foundation, said, “We are proud to support IFSG’s Stars of Tomorrow initiative as it resonates with our Foundation’s objective of contributing towards building India as an even greater sporting nation. Felicitating the athletes at the event, Mary Kom, 6-time World Amateur Boxing Champion, said. “I am happy to be associated with IFSG’s initiative as I feel that for India to truly become a sporting nation and be seen as a strong contender in the international arena, support needs to be given not only for team sports but also to individual sports. IFSG’s Stars of Tomorrow is another welcome step towards achieving national goals.”For more on the programme and the athletes- http://sot.ifsg.in/.