Indian Prince Manvendra Singh Gohil, the son and probable heir of the Maharaja of Rajpipla in Gujarat was the special guest for the competition.

The prince interacted with the participants and congratulated the prize winners.

The GANA contest became a big hit with the Youth representing various colleges presenting the theme “SAFER IS SEXY” in very spicy lyrics and motivating the YOUTH to make safer decisions when it comes to matters regarding SEX. The GANA music and tunes took the young crowd to dancing and cheering their college mates and encouraging them. The messages from the guests were received well by the Youth amidst shouts and cheers. Popular GANA artists entertained the crowd in between the contestants and took the audience by a storm. Many of the GANAS that were presented by the contestants matched the quality of the professional singers and was lauded with praise.

The event also witnessed “CONDOM FASHION ACCESSORIES” – garments made of CONDOMS and evoked interest in the youth and there was a long line for SELFIES with the CONDOM MANNEQUIN. A 40 feet long inflatable CONDOM placed near the podium was utilized to collect as many as signatures as possible endorsing CONDOM use and organizers are attempting a LIMCA Book of RECORDS on “MAXIMUM SIGNATURES ON A CONDOM ENDORSING SAFE SEX”! 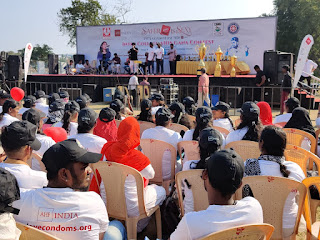 FREE HIV TESTING and FREE CONDOM distribution was also done at the venue and the services were utilized by many youth and other visitors from the general public. The HIV testing was conducted for Consenting Adults and the results were shared confidentially after Post Test Counselling. “Globally there are 1.7 million new HIV infections annually and more than 1 million new cases of curable STIs every day, according to UNAIDS and the World Health Organization, respectively. That is unacceptable when those conditions are one hundred percent preventable if people have easy access to free or affordable condoms.” “People cannot take charge of their health if widespread stockouts, shortages and unaffordable prices for Condoms continue – remarked- Dr. V. Sam Prasad, COUNTRY PROGRAM DIRECTOR, AHF INDIA. “The discussion on CONDOMS should become a normal topic of discussion in families across India. The medium of GANA is a great tool to reach the YOUTH and promote the message of CONDOM use and adopting Healthy Lifestyles remarked Dr. V. Sam Prasad, COUNTRY PROGRAM DIRECTOR, AHF INDIA 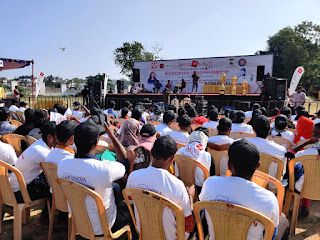 Speaking on the occasion of the International Condom Day 2020, Mr A J Hariharan, Secretary ICWO said” India is the youngest country in the world having majority of youth population who is the future of the nation. Tamilnadu is the model state in India implementing HIV prevention campaign a decade before. But now it is time that we reinforce these messages using innovative platforms like the inter college gana contest to attract and educate the young people for building a healthy future. 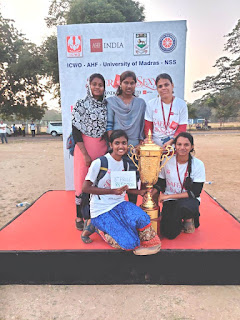 The event came to a close with a CLARION CALL to the YOUTH – “SAFER IS SEXY” and urged them to continue educating their communities to spread the message of CONDOM use to de-stigmatise CONDOMS in the Community.
at Saturday, February 15, 2020