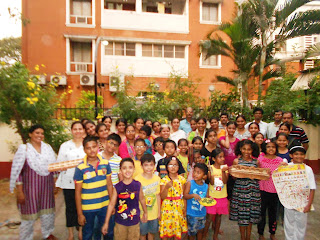 MGGERC Trust,Chennai and WILLAGE(Welfare Initiative for Land Learning and Agriculture through Green Ecosystem jointly organised a summer event for the 45 children of Shanthi colony ,Anna Nagar to bring back the joy of playing traditional Games to children who these days are attached to modern day gadgets. Mr.K.Vishwa and Mrs.Akila Coordinators of the event explained the children about the Physical and mental exercises involved in playing traditional games. Mr.G.Alagarasan detailed the practices to be followed during these games. Parents also played the traditional games and encouraged the children to be actively involved. Winners were honoured with many prizes. For more details contact Mr.K.Vishwa at 98417 22255 and 98841 22255.
at Thursday, April 28, 2016