Lifetime Achievement Award for his contribution to his profession and society 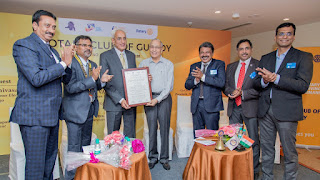 In a well-attended function , the Rotary Club of Guindy presented its Lifetime Achievement Award to Mr Srinivasan K Swamy, Chairman of R K Swamy Hansa group for his exemplary contribution to the advertising and marketing industry and to the society at large. This is the third time in the Club’s history of 22 years that they have chosen to honour an individual. Mr Swamy, just earlier this year received Advertising Agencies Association of India’s Lifetime Achievement Award and The Advertising Club Madras’ Distinguished Service Award. The Chief Guest for the evening was Mr N Murali, the President of The Music Academy, Madras. He recalled Mr Swamy’s contribution to various industry bodies in India, Asia and also at the Global stage. He appreciated Swamy’s devotion to social, charitable and religious causes he is involved in. Rotarian R Srinivasan, District Governor Elect was the Guest of honour and he expressed happiness over the choice of Mr Swamy saying that he has balanced both professional and service aspects very well. In his acceptance speech, Mr Srinivasan K Swamy expressed his appreciation for the excellent service being rendered by Rotary to the society. He attributed his success to pursuing things that are interesting to him, rather than attending merely to what is urgent or important. The Club’s President Rtn Kathirvel Ganapathiappan welcomed the gathering. Secretary Rtn V Sridhar, Past President Rtn J Venugopal, Past President Rtn Jagannath Ramaswamy and Vocational Service Director Rtn Karthikeyan also addressed the gathering.
at Saturday, December 03, 2016