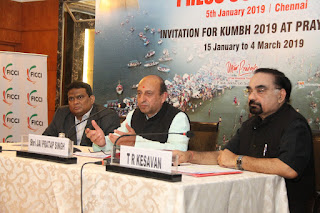 A total allotment of Rs 4300 crore has been made for creating all necessary infrastructure for Maha Kumbh Mela 2019 at Prayagraj, formerly called Allahabad, from January 15, said Jai Pratap Singh, Minister of Excise and Prohibition, Government of Uttar Pradesh. Addressing the media under the auspices of FICCI, he said the Chief Minister of Uttar Pradesh Yogi Adityanath has made him an ambassador to promote Prayagraj Kumbh, which has UNESCO's intangible cultural heritage of humanity acknowledgement. He said the whole idea is to promote spiritual tourism and showcase Uttar Pradesh to the outside world. He also said the state government is making elaborate arrangements for the successful organisation of the Kumbh 2019, which will see a gathering of over 20 lakh people from all over the world.`` The UP government has already launched the new logo of Prayagraj Kumbh 2019 in accordance with the nature of the event,''he said and added, ``Special priority has been accorded to providing better facilities to the devotees and tourists attending the Kumbh for all its religious and cultural fervour.''Shri. Jai Pratap Singh said that the state of Madhya Pradesh also held a Kumbh Mela two and a half years ago to attract people from different walks of life and make them partake of the spiritual food offered at the event. He said that the people from south visit Ayodhya and the Ram Mandir and this time they can come to Prayagraj to enjoy the events associated with the grand Kumbh happening on the confluence of the mighty Ganga. The holy event is organised at four places in the country and the event held at Prayagraj is the subject of special curiosity and attraction for the country and the world. The UP minister said the state government is committed to providing a devotionally and spiritually changed atmosphere to pilgrims coming to the event, adding, ``In this most massive human congregation of humanity, people of over 6 lakh villages of India along with the overseas devotees will participate.'' For the convenience of pilgrims, the minister said the facility of reaching the place by air, road, rail and river has been made for the first time. Jai Pratap Singh said, ``The UP government is making efforts to familiarise the world with the high-quality life, conduct and thoughts of Indian culture through Kumbh Mela.''For the convenience of devotees visiting the Kumbh, the UP government has made available the facility of modern and smooth traffic movement to Prayagraj by constructing flyovers and widening railway underpasses besides creating traffic crossings. It is also for the first time, the Kumbh area is being brightened up by installing over 40,000 LED lights. Efforts are on through road shows in various states to bring the people to the Kumbh and there will be programmes on ancient cultural heritage as also cultural, food festivals and more. There are facilities for housing, meal, tours and holy bath and a tent city is being developed in the Kumbh Mela area. As Kumbh 2019 has been linked to the concept of Cultural Kumbh, Safe Kumbh and Digital Kumbh, the UP government is laying special emphasison cleanliness during the event and there are 122000 toilets available for the pilgrims as against only 34,000 toilets during the previous Kumbh. There are efforts to keep the banks of Ganga and Triveni clean and the waters of the holy rivers polluting free. Prayagraj city has been beautifully decorated with pictures and drawings of Indian culture and art. The walls of Prayagraj are showcasing Indian culture in the most effective way.T R Kesavan, Co-Chairman, FICCI Tamil Nadu State Council and President and COO, TAFE, in his welcome address, said the first Kumbh dates back to 644 AD on the banks of Ganga in Prayagraj and there is so much of the importance attached to the holy event all because of its connect to astronomy, astrology and socio-cultural traditions of yore. He said the UP minister's presence will make the people of Tamil Nadu understand the significance of Maha Kumbh Mela 2019 and make their attendance at the important spiritual event. He also recalled his earlier trips to Allahabad and the place that had all the essence of modernity.Ruban Hobday, Head, FICCI Tamil Nadu State Council, spoke on the importance of Kumbh Mela and FICCI's association with the government of UP in promoting the most happening event on the earth.