Speaking on the occasion Dr.Volker Lennart Plan, Resident Representative – HSS India said- It's a pleasure to side with ICWO and Dr Nair on this project. Human Trafficking is a transboundary and international issue. Hanns Seidel Foundation India is a political foundation from Germany. As a political foundation, we work with governments, NGOs and state institutions. We support projects with the Karnataka State Police, universities, rights-based NGOs or political think tanks from all over India states can implement laws, the police can execute them, but it's up to NGOs to ensure awareness about these laws and rights. For this, a good coordination between all stakeholders is necessary. The experience and networks of NGOs are crucial to achieve this goal. This is HSFs first project in TN and we appreciate the very promising alliance between P.M.Nair and ICWO and will continue to support it. Nair had been associated with HSF's work since 2015. HSF is part of Germany's Federal Development Policy. Even the German Consulate works on Human Trafficking and HSF, too, hopes to support India's laws and fight against HT. HSF also works worldwide on water/environment, federalism, and international cooperation in more than 60 countries. 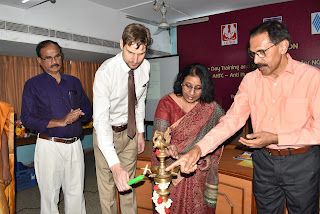 Speaking on the occasion Dr.P.M.Nair, IPS. (Retd.), International Expert, Human Trafficking Matters said that 38 NGOs in Tamil Nadu is a strong number and that great things could be achieved in the field with this strength. Almost 50 percent of the NGOs would already be having knowledge and experience as they have already been working in the same field but the remaining may need some orientation and guidance to carry this initiative forward. So how is it that we are going to take this forward is by connecting with colleges, with teachers, who are sensitive, sensible, and genuinely concerned in the matter, and students, around 15 to 20 students from each college, and explaining to them what human trafficking is and how to fight against it. In simple words, human trafficking is the buying and selling of humans. However, humans are not commodities and they cannot be sold. If your sister is not for sale, then some other girl is also not for sale. AHTC in colleges can connect with NGOs like Childline, and help victims of human trafficking and intervene. Panchayats against Human Trafficking (PAHT) also play a vital role in taking the matter forward in villages. Giving awareness to children, to both boys and girls about “good and bad” touch, to Mothers, saying that their children cannot be exploited even by their own family members, and that they have to voice out against them and protect their children.

Speaking on the occasion Mr.A.J.Hariharan, Secretary-ICWO said the concept of AHTC was developing by Dr.P.M.Nair, IPS (Retd.) which was successfully initiated in Kerala. ICWO is planning to initiate 100 AHTCs in college & institutions in all 38 districts in within the period of 2 months. In all the Districts NGOs identified to support AHTCs activities. Capacity building will be done by ICWO for AHTC mentors, members and district NGO partners for the successful implementation of AHTCs in Tamilnadu. The AHTCs will create the awareness in the college campus and out in general public with the support of HSF – Hanns-Seidel-Stiftung India . AHTCs will identify human trafficking, rescue, reintegrate and prevent exploitation of women and children. AHTCs will identify and STOP crime against women and children with the support of district NGOs in Tamilnadu.  Indian Community Welfare Organisation - I.C.W.O. a non-governmental organisation working for various developmental projects with specific focus on women and children for the past 27 years in Chennai.